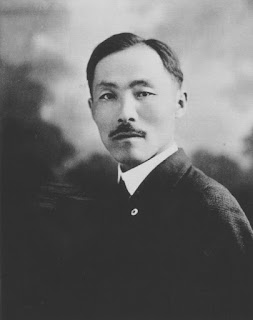 One hundred and thirteen years after Dosan Ahn Chang-Ho set his first step onto the American soil, his footprint was now permanently honored as a part of the International Civil Rights Walk of Fame, located at the Martin Luther King Jr. Center, Atlanta, GA. It was also an appropriate time to celebrate his accomplishment and legacy as Korea celebrates 70 year anniversary of its Independence from Japan.

On August 13, Asian Americans Advancing Justice-Atlanta was invited to the unveiling of Dosan Ahn Chang-Ho’s footprints which now resides with those of many other Civil Rights activists, such as Rosa Parks and Congressman John Lewis at the International Civil Righst Walk of Fame at the Martin Luther King Jr. National Historic Site.

Born in 1878, Ahn Chang-Ho was an Korean independence activist who entertained and set out to exercise clear reforms to education and the modernization of schools in Korea, two of the most important efforts dedicated by Ahn Chang-Ho. Also known as Dosan (도산)- his pen name- Ahn Chang-Ho was respected as a patriotic figure who fearlessly fought for democracy and independence to prevent Korea from being obliterated by Japanese imperialists.

Since he was young, Dosan, with the ultimate goal of reforming and modernizing the nation of Korea, studied Western Education and became a great leader and educator. To seek better education, Dosan and his wife arrived in the United States in 1902, which made them the first married Korean couple to set foot on the Mainland. To advocate for his mission, Dosan circumnavigated the globe, starting in America in 1902 and going on to travel across Asia, Russia and Europe to return successfully to New York in 1911, making him the first Korean to go all around the world. During his immigration into the U.S., Dosan managed to establish the Friendship Society in 1903 and Mutual Assistance Society in 1905 to reform the local Korean community in San Francisco, California by establishing the Young Korean Academy in San Francisco in 1913.

Leaving behind his legacy to the Korean people in America, Dosan returned to Korea through China in 1926 to protest out of love for his country and his people. Irritated by Dosan’s anti-Japanese and patriotic activism, Japanese imperialists arrested and tortured him multiple times during his imprisonment. Dosan never came back to America. He was released on bail by Japanese authorities and died in a the Kyungsung University hospital on March 10, 1938 after he lived an honorable life. Many scholars believe that, had he lived beyond Korea’s liberation in 1945, Korea would not be divided.


The induction of Dosan Ahn Chang-Ho was a recognition of his beliefs and work. We wished someday there would be more people who could interpret his legacy in a more global context and understand his contribution to the advancement of civil rights. 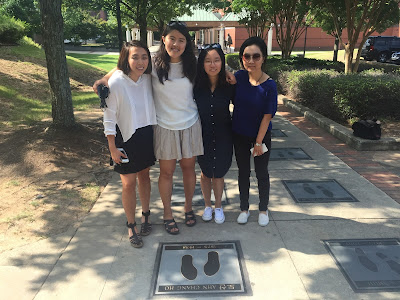 Posted by Unknown at 7:38 AM No comments:

Email ThisBlogThis!Share to TwitterShare to FacebookShare to Pinterest
Labels: Engage 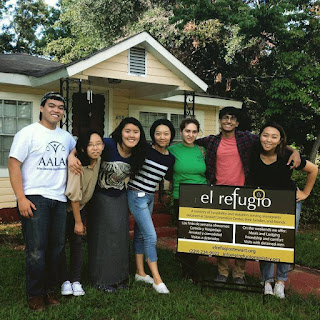 Advancing Justice-Atlanta staff and Interns visited Stewart Detention Center, located in Lumpkin, GA, a three-hour drive from Atlanta. Operated under the Corrections Corporation of America-a company that owns and manages private prisons and detention centers. The Center is a corporate-run and for-profit facility, currently detaining approximately 1,700 men. The Center only holds males, whose families, if they lived or traveled with them, were separated from them and sent to other detention facilities.

The staffs and interns arrived at Lumpkin, GA around noon. We were welcomed by El Refugio, a hospitality house serving family members who came to visit their loved ones in Stewart Detention Center. Anton Flores-Maisonet, one of the volunteers there, introduced to us the history and the situation of Stewart Detention Center whilst giving us instructions of how to communicate with the inmates.

Each one of us was paired up with a detainee who had written request letters for visitors. The detainees spoke different languages, including Spanish, Bengali, Arabic, Nepalese, Hindi, Chinese, etc. After a long wait at the visitors’ area, we were eventually able to meet with our friends in the detention center. Several of the detainees had never had any visitors before us; separated by a plexiglass wall we could only talk with them through a telephone set on each side of the partition.

From the conversations we had, we learned that many of the detainees fled their countries in fear of political persecution or police brutality. They came to the U.S. with families and friends and turned themselves in at the U.S. border to seek asylum. However, upon detainment they were placed in Stewart and became separated from their families, who were detained in other detention centers. Other detainees were people who outstayed their visas or undocumented immigrants who were arrested by law enforcement for minor offenses, such as running a red light. Detainees stay in the facility for long periods of time that ranges from several months to two years or more, though 93% of them are eventually deported.

People spend the one-hour recreational time on working within the facility for $1 to $4 payment per day. They wash laundry, clean, work at the supermarket, etc. Each detainee has only one hour of visitation time each week, during which they are allowed to meet with their families and friends. For this reason, many families came to Stewart Detention Center on Saturday we visited to see their loved ones. They would then stay over at El Refugio in order to have another visit on Sunday.

Currently, there are Spanish, Chinese, Korean and Nepali speakers in the detention center. Our group got to know them as they wrote request letters for visitors, from which Anton assigned us a friend to speak to in the Center. There might be other language speakers who had not done so due to language barriers and other reasons.

The people at Stewart Detention Center appreciate visitations and friends to speak to, and El Refugio depends entirely on volunteers. If you are interested in visiting the detention center or helping out at El Refugio, visit El Refugio’s website at http://elrefugiostewart.org/ for more information. It was a meaningful experience for us to become aware of the system of detaining immigrants for profit as well as to learn about the experiences of the detainees there.

Check back with us as we will share more stories from the visit to the Stewart Detention Center.

Email ThisBlogThis!Share to TwitterShare to FacebookShare to Pinterest
Labels: Immigration


When asked to reflect on the Asian-American experience in the South, several things immediately come to mind. I think back to the days of smelly lunches, people asking me if I understood English, and the constant feeling of being different. However when Matt Hashiguchi, an award winning documentary film maker, came and visited us here at Advancing Justice on July 21, 2015, we had to dig a little deeper, and recall a little further of what makes the Asian American experience in the south different from anywhere else. Matt primarily focuses on cultural and ethnic stories, motivated by his own half-Japanese, half-Italian background and the experiences he faced because of that, so the questions felt more like a conversation than an interview.

The staff and we interns eased into this topic smoothly because it is definitely something we have all thought about. Esther and Claire provided a unique perspective because although they grew up in the South, they have been attending college in the North for the past couple years. In their experience, the racism, discrimination, and dual feeling was equally as prevalent in the North as in the South even if it takes different forms. Language and accents became a source of discussion because every single one of us here had seen or faced such a situation such as being asked whether we need help, speak English, or our parents being asked to repeat something or being treated poorly.

Matt was constantly stressing on how any of this was any different than the North, and it wasn’t until another staff member joined the discussion did we really hit on what makes the South unique. She pointed out that the Asian American community in the South is not as well established as the North; the Advancing Justice branches in the North and on the West Coast are proof of that very observation because they are over a decade older than the Atlanta branch. She additionally mentioned that the legacy of racism in the South dates all the way back to the Civil War, so the historical context with which people view racism in the South is very black and white vs somewhere like California because of incidents like the Japanese internment camps during WWII.

Matt was especially interested in the concept of an “in between” feeling many Asian-Americans talk about, the sense of never truly fitting into either culture. Leslie, an international student from China, provided the apt contrast to all of our in between experiences because she said she has always considered herself just Chinese, not Asian or Asian-American. Esther and I recalled experiences at our heavily Asian populated school of never being part of a group, distancing ourselves from the Asian American community, or doing the complete opposite and isolating ourselves to just our community. Raymond’s experiences of growing up in Macon, Georgia, a predominately white neighborhood, really spoke to this topic because he really wasn’t exposed to the Asian American community until later in his life. He struggled with being open about his Filipino heritage in public in addition to his immigration status. Matt was fascinated with Raymond’s story, DACA, and his political awareness about the situation in Georgia and other states in the South.

The discussion forced all of us to introspect on the emotional impact of being an Asian-American particularly in the South and relive specific experiences. Matt was looking for a subject, a unique experience in the South, and although he didn’t quite get exactly that, our discussion definitely pointed him in a direction whether that be the lack of race discussion, the “in between” experience, or even the newer establishment. Either way, our conversation proved to be a learning experience for all of us, and helped us find common ground with each other no matter what our nationality.


Check out Matt’s work at his website: http://www.matthewhashiguchi.com/
Posted by Unknown at 1:16 PM No comments: